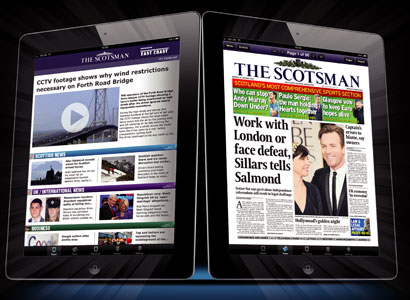 The Scotsman is today launching a £7.99-a-month iPad app.

The app, which will be free for the first 30 days, is aimed “to appeal to regular readers, subscribers and scotsman.com users, and offers the opportunity to grow readership amongst iPad users, business travellers, sports fans, expat Scots and commuters”, according to a release.

The Johnston Press-owned title added in the release that this is “Scotland’s first dedicated multimedia news iPad app”.

This is a major development which keeps the Scotsman up to speed with the latest media technology. Devices such as the iPad will play an increasingly dominant part in the way people access information and this is one of the most important steps forward in the Scotsman’s 200-year history.

It is a very different experience to reading online and having been at the forefront of that newspaper revolution over ten years ago it is fitting that we are in the midst of this one.

The Scotsman app offers the best of both worlds, giving readers the choice of either leafing through the pages of The Scotsman newspaper or of reading the content in a digital format, with live news, video and enhanced use of photographs. Either choice provides a great new way to keep in touch and up-to-date

The app is sponsored by train company East Coast for the first four months.