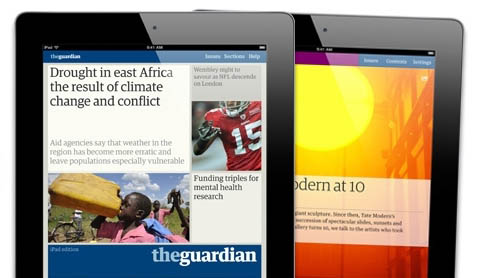 The Guardian iPad edition has been downloaded more than half a million times since it launched in October 2011, with 23,000 downloads on Christmas day alone.

The Guardian has not released figures for the number of editions downloaded.

From Friday 13 January iPad readers will be asked to pay £9.99 for a monthly subscription. Content has been free of charge for users in the first three months since launch, due to a sponsorship deal with Channel 4.

From tomorrow (Saturday 7 January) the app will include the Guardian’s Weekend magazine for the first time. The new weekly section, accessible from the app’s top navigation bar, will feature content from the Guardian’s award-winning magazine supplement, including columnists and recipes.

In a release, Merope Mills, editor of the Guardian Weekend magazine, said: “Weekend magazine’s stunning photography perfectly suits the form and the clean, modern design of our app on iPad. From tomorrow, readers will be able to enjoy a leisurely read of our award-winning longform journalism, flick through the galleries of ‘Your Pictures’ or watch our brilliant fashion and beauty correspondents Jess Cartner-Morley and Sali Hughes, as they guide readers through the latest lifestyle trends.”

The release also states that Guardian six- and seven-day print subscribers will continue to receive free access to the app after the three month period via their current subscription. Users who download the app after 13 January will receive a week’s free trial before signing up for the monthly subscription.