Tool of the week: Buffer

What is it? A tool that allows you to schedule tweets

How is it of use to journalists? How many of your followers saw the last tweet you sent? As Twitter is a scattergun approach to sharing news, it is likely that most followers will have missed it.

Buffer is a tool that allows you to schedule tweets, posting them at selected intervals throughout the day. You can select Buffer’s suggested tweet times, which are based on research, or you can choose your own times. 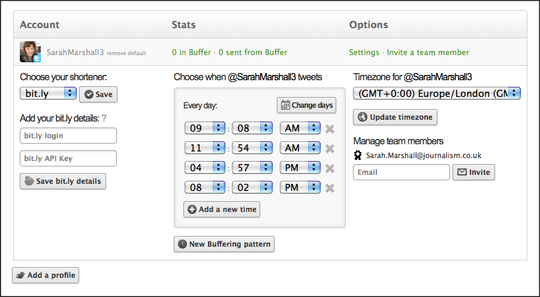 Buffer could be helpful to news organisations who want to post a story, such as a feature or blog post, several times. It could also help in crowdsourcing, tweeting a request more than once.

According to Buffer co-founder Leo Widrich, who spoke to Journalism.co.uk and is quoted in this guide on how to: best post news on Twitter and Facebook, news organisations should tweet each story three to five times: for example once when the news story goes live, once a couple of hours later and then a third time the next day.

That’s very much a use case of why we built Buffer, but this is what we do for our news stories and blog posts. We drop all the stories we have into our buffer and they get well spaced out over the day and get posted so that we always have a different audience that will be able to see the tweet.