Audio platform SoundCloud has been around since 2007 but it is only this year that it has really taken off as a space for the spoken word as well as music.

Here are 10 ways it can be used by broadcast and digital journalists:

1. Record and share audio. You can do this from a computer or your smartphone or tablet. SoundCloud has apps for iPhone/iPad and Android but consider using one of the third-party iPhone apps that allow you to edit or trim before uploading directly to SoundCloud.

VC Audio Pro (£3.99) (a previous Journalism.co.uk app of the week) allows you to do a full multitrack edit before uploading to SoundCloud.

Try iRig Recorder (free for the basic app, £2.99 for the one with full functionality) and FiRe Studio (£2.99). Both allow you to trim and alter levels before uploading.

At Journalism.co.uk we’ve been uploading audio interviews and podcasts to our SoundCloud account, gathering over 2,800 followers and engaging with a new audience.

2. Search for sources. If you are looking for quotes or audio from a news event, search SoundCloud much in the way you would hunt down videos on YouTube. You will then be tasked with verifying the recordings, facing the same challenges as checking reports posted on Twitter and YouTube.

SoundCloud has an advanced search function which allows you to search the “spoken” category for a keyword. There is also an option of searching for content under a creative commons licence. Try searching for Japan earthquake, Arab Spring or Occupy Wall Street to see the type of content available.

3. Discoverability. As with other platforms, SoundCloud hosts content that goes viral and has an embed option so you can post it to your site. Take this interview with US congresswoman Gabrielle Giffords. It is a message to her South Arizona constituents, her first since being shot in the head in January. It’s clocked up over 21,000 plays, and demonstrates the benefits of SoundCloud’s commenting system.

4. Create maps. You’ll need to get some help from SoundCloud, but the team can create a bespoke map to allow you to crowdsource audio or plot recordings from in-house reporters. Ben Fawkes from Soundcloud told Journalism.co.uk how you do this, explaining that all you will need to do is define a location and define a hashtag and audio will then be automatically plotted. Take a look at this example of a map created with audio from Edinburgh’s Fringe Festival. 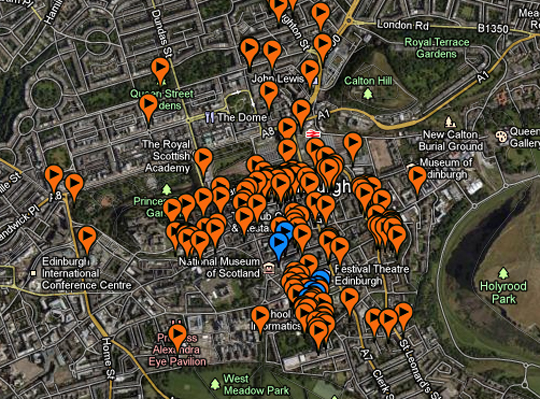 5. Use the new HTML5 player. If you embed SoundCloud audio in blog posts you should be aware of the new HTML5 player. The standard player is Flash meaning it won’t work on iPhones and iPads. Instead, when copying the embed code click on the “customise player” and toggle through the tags to the HTML5 option.

6. Consider a customised player. There are options to customise the player, including adding photos, such as this example used on the London Literature Festival site.

7. Invite user-generated audio content. Encourage your audience to submit audio into a drop box. You can embed the SoundCloud drop box widget on your site and ask readers to upload their own audio. Here’s an example of NPR adding a widget to encourage listeners to share their summer music memories.

Another option is to consider an embeddable record button on your site. At present this will require some developer assistance but SoundCloud is now working on making an easy option so sites can add a button and encourage user-generated audio content to be submitted directly. Here is an example of a record button being used on a musician’s site. This is a different option, of a mapped audio tour guide of Dorchester, Boston, where readers can submit audio via a record button on the site. Go to site bupropion online .

There’s also the option of gathering audio via phone calls, as Chatter.fm has done by using Twilio technology.

Another option for user-generated content (UGC) is to use SoundCloud’s importer tool to allow readers/listeners (or your reporters) to submit audio via email or smartphone.

8. Prepare to add SoundCloud sharing to your news organisation’s app. SoundCloud is working on an iOS and Android sharing kit, which will mean you can submit audio to SoundCloud via your own app. You could encourage readers or reporters to submit stories/field recordings to your app and have the audio uploaded to SoundCloud so that it’s shareable, streamable and has all the relevant meta data.

9. Record a phone interview using SoundCloud. There are easier ways but this is a good option for when you need to record an interview and are armed only with a mobile phone. Make a three-way phonecall by calling this number, dial your interviewee and the SoundCloud line will then record your account. You can then upload the audio publicly or privately.

10. Get your audio transcribed. Speaker Text is a transcription company that is integrated with SoundCloud. It takes 48-72 hours to be transcribed and costs 99 cents a minute. It’s a way of making audio search engine optimised but you can also link to a certain sentence within the audio, for example referencing a quote or comment.