After the second day of sessions focused on business at the Global Editors Network news summit, including paywalls and paid-for app, it was fitting that during the third and final day of presentations we heard about projects offering content and platforms for free.

One such project came from Russia Today which outlined its FreeVideo platform, described as an “English language video agency”. The website, which should be of interest to journalists worldwide, provides free video footage that journalists can download, edit and reuse for their own projects and output. 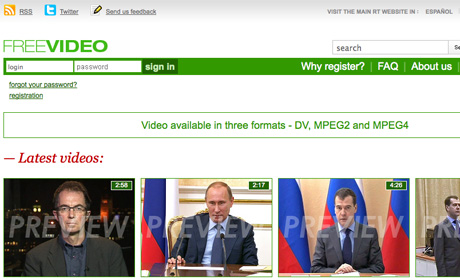 Answering a question from the floor about the business model, Alexei Nikolov, managing director of Russia Today, said it was to “promote the channel” on a global scale.

The site includes “stock footage” as well as video covering specific news events. Xenia Fedorova, head of the department of promotion and development of media projects for the broadcaster, explained that all the footage comes with multilingual scripts and shotlists.

She added that the website has more than 9,000 news channels already registered and using footage “on a daily basis”.

I spoke to her more at the end of the session about the decision to go down the free distribution route, their attribution methods and to find out whether there are plans in the pipeline to monetise the platform.

There are of course other platforms out there offering video content to journalists, such as the UK-based Video News Agency and also in 2009 Al Jazeera opened up its footage under creative commons licensing.