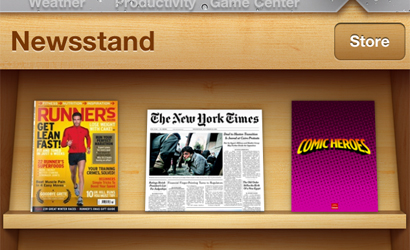 Six million apps of magazines published by Future Publishing have been downloaded since the launch of Apple’s Newsstand six weeks ago.

In the first month since launch, the magazine publishing company, which has apps of 65 UK titles, made $1 million in the increased business, Mike Goldsmith, editor-in-chief of iPad and tablet editions at Future Publishing, told Journalism.co.uk in a podcast on how Apple’s Newsstand is revolutionising the publishing industry.

Newsstand, which launched on 12 October when Apple released iOS 5, is an iPhone and iPad home screen app that acts as a direct portal into a new magazine and news publication section of the iTunes App Store.

Future, like other publishing companies, has appealed to customers by offering free downloads of particular back issues, with iPhone and iPad users responding by downloading five million free editions.

Goldsmith said initial statistics are encouraging with 40 per cent of sales being made up of subscriptions rather than individual editions.

Other publishers are also reporting an increased impact. Daryl Rayner, managing director of Exact Editions, which works with publishers to create digital editions, reported “very pleasing results” with 15-30 per cent of subscriptions taken out on an annual basis rather than as 30-day subscriptions and renewals at 85-88 per cent.

Chris Talintyre, head of direct and digital marketing at Factory Media, which publishes 27 websites and 19 magazines, reported more than 850,000 downloads and initial sales data for October showing a month-on-month increase of 150 per cent since Newsstand’s launch.

Goldsmith said Newsstand is “absolutely intrinsic to the future of Future Publishing,” which yesterday reported a £19 million loss, largely because of a slump in print in the US.

Future said that its UK operations had been “resilient” overall, with revenues falling just 2 per cent.

US losses were “partially offset” by growth in digital revenues, which saw a 25 per cent hike.

Goldsmith illustrated how the iPad and Newsstand is changing the magazine market with the example of Comic Heroes, a special edition, bi-monthly magazine. On the physical news stand “it does okay”, he said, but “it’s a special edition and no one expects it to do marvellously”

But on Newsstand things are different.

It’s our second biggest page turning, flat app. It has gone through the roof because it is a brand that means different things to a different device. And that means we will invest in the title in terms of IP, in terms of staffing, in terms of marketing, in a way that we previously probably wouldn’t have invested in to that extent.

Is it going to revolutionise our business? It could do, it could well do.

I think the next 12 months are gong to be very, very interesting indeed.

Click here to hear more statistics and how Newsstand is revolutionising magazine publishing.