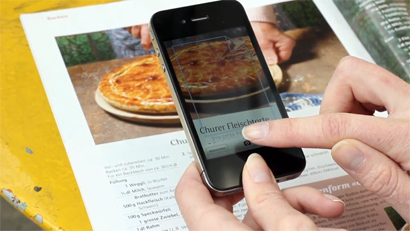 From today you can use the free Paperboy iPhone and Android app to take a photo of newspaper or magazine article and image recognition technology will use the picture to find the digital version of that story. You can then share the digital article via social media or save to the app’s library, or to note taking and archiving platform Evernote.

The Guardian, Telegraph, Times and Independent are among over 100 UK titles to be searchable via a mobile phone photo. There are also plenty of local titles involved, such as the Yorkshire Post, Kent Messenger and Sunderland Echo.

“We bridge the gap between print and online”, Tom Desmet, marketing manager of Kooaba, the Swiss start-up specialising in the image recognition technology behind the app, told Journalism.co.uk, speaking of his high expectations for the app.

In a way it has the potential to revolutionise the newspaper business for both the reader and the publisher.

The technology was first introduced in Switzerland and last month was enabled for German and Austrian newspapers and magazines, following a partnership deal with digital news distributers NewspaperDirect. The UK, US and Canada today (Tuesday, 1 November) join the growing list of countries to have photo-searchable titles.

How are people using Paperboy?

The initial Swiss launch a year ago has given Kooaba the opportunity to test the app and discover how people are using it, Desmet explained.

Recipes are doing particularly well, according to Desmet.

We’ve got some magazines that are only doing recipes and people really love to remember those things.

How does the app make money for the company behind it?

There is no charge for smartphone users to download the Paperboy app and the basic package is free for publishers. Adding additional content, such as including videos in a digital article, carries an upgrade fee.

Kooaba earns “a little kick back fee” if a photo referral from the app to NewspaperDirect results in a reader paying for a digital subscription, but the majority of the apps’s earnings are generated by interactive adverts, Desmet explained.

If you take a picture of a page and there is an advert and it’s interactive, you can get additional product information or find the nearest retailer.

How can news publishers make their print editions interactive?

Publishers have two options to make their digital editions available: they can either approach NewspaperDirect or go directly to Kooaba.

All they have to do is upload a PDF of a newspaper every day to our backend and it will be interactive and it doesn’t cost them anything.

How does the image recognition technology work?

Desmet said the company is confident that the technology “works really well” and is almost aways problem-free. He said that stories that are text only and without photos are occasionally not recognised but this “almost never happens and it is something we are working on”.

Kooaba is a world leader in the image recognition field, according to Desmet, who said one of the company’s earlier apps predated Google Goggles, an app that allows you to take a photo of an object and use the picture to search the web.

We were the first to have the visual search, even before Google Goggles was out there, but then they created the same app and we couldn’t compete – so we got into a really specific use case and launched Paperboy.

Paperboy can be downloaded for free from the iTunes App Store and the Android Market. The company is also working to release a Windows phone app.

The Paperboy app can be used to snap and search the following UK titles, according to a list on NewspaperDirect.