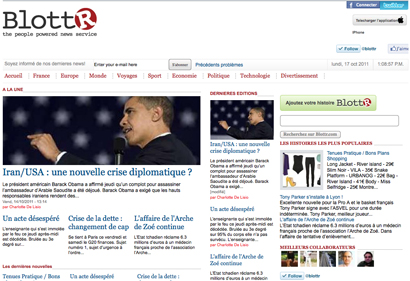 Citizen journalism breaking news site Blottr has launched in France in and is due to follow with a German site next week.

Blottr, which launched in the UK in August 2010 and received £1 million in funding to expand six months ago, relies on a network of more than 1,000 citizen reporters, non-professional journalists and bloggers who report on breaking news and provide comment and get paid by how many clicks their story receives.

The official launch of the French site, which will focus on Paris, Lyon and Marseille, takes place in Paris today; the German site, with news from Berlin, Frankfurt, Hamburg and Munich, is due to go live next Monday (24 October). Blottr aims to expand into 50 cities in 10 countries within the next six months.

Country managers from France and Germany have been brought in to lead the French and German sites, both working from the London office, which now has 12 paid members of staff.

We are really excited about bringing citizen journalism to France, a country with a deep-rooted, passionate and traditional set of values when it comes to publishing and the consumption of news.

We enter France at a time when the appetite of the public to report news, coupled with technological advancements that enable people to report it, has never been so great. We look forward to giving the people of France a voice and a platform to report news they witness for the betterment of all.

Blottr’s French site can went live last Wednesday (12 October) and the German site can be viewed from next Monday (24 October).