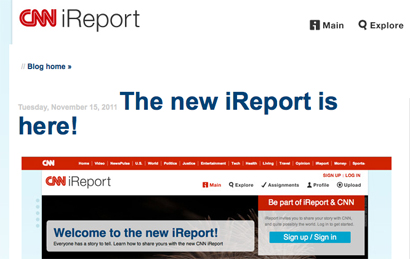 Director of new product development at msnbc.com Cory Bergman has outlined the site’s latest use of social media in a post on lostremote.com which was put to use yesterday during the London student protest.

This includes not only curating updates from “observers at the scene” but encouraging other social media users who ‘spot’ an interesting photo, video, or Twitter posting to send a link to the related Tweet to the site.

Notice we’re not asking users to send us photos/video, but send us links to photos/video. So if someone you’re following on Twitter stumbled across a story, you could send us a link to her tweet. That’s a big philosophical shift for news organizations that historically want people who shot a photo to send it directly to them. But social platforms like Twitter, Facebook and YouTube have become the standard ways that people share breaking news, and you can “spot” news without witnessing it yourself.

Earlier this week Lost Remote outlined five things it thinks newspaper employes could do to help save their company: cut back on travel expenses; stop meeting about everything; ‘figure out what you add’; stop ‘useless spending’ and ‘stop being so comfortable.